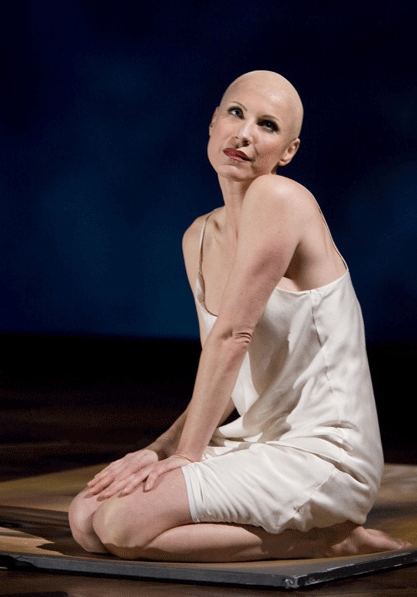 THIS PAGE IS UNDER CONSTRUCTION AND WILL BE UPDATED SOON!

Opera star Nadja Michael grew up in the East of Germany, near a city called Leipzig. Her career started with the studies of vocal arts in Stuttgart, Germany and later at a University in Indiana, USA.

As a frequent guest performer on the world´s most famous opera stages, Nadja Michael sings for the most renowned conductors in present times. Among others she performed at the Arena di Verona, in Glyndebourne and at the Salzburg Festival. Several times she worked with the Chicago Symphony Orchestra, for example as BRANGÄNE under the musical direction of Daniel Barenboim in Wagner´s “Tristan und Isolde” and under Zubin Mehta as DIDON in Berlioz´s “Les Troyens”.

In February 2007 she had a great success with SALOME at Milan´s Scala, followed by an equal success with FIDELIO at the State Opera of Vienna. After numerous triumphant productions as SALOME at the Royal Opera House in London, Mrs. Michael gave her spectacular debut as Cherubini´s MÉDÉE at the Théâtre Royal de la Monnaie in Brussels. Her performance of LADY MACBETH/VERDI at the opening of the season 08/09 at the Bavarian State Opera Munich was euphorically celebrated by audience and feuilleton. Nadja Michael´s first step into the Belcanto-Repertoire as MEDEA in G.S. Mayr´s Medea in Corinto at the Bavarian State Opera Munich was also a tremendous success. At the end of 2010 she sang LADY MACBETH/VERDI by the side of Thomas Hampson at the Lyric Opera of Chicago, as well as at the Metropolitan Opera House in New York. In 2011 she made her debut as MARIE in Berg´s Wozzeck under the direction of Daniel Barenboim at the Berlin State Opera Unter den Linden. This was followed by her next debut in Cherubini´s MÉDÉE in 2012 at the Théâtre de Champs Élysées in Paris. The first modern part MONTEZUMA/Rihm (The Conquest of Mexico) at the Teatro Real Madrid in autumn 2013 under Alejo Perez opened new spaces and turned out a triumph.

Her unique vocal performances and numerous outstanding opera roles brought Nadja Michael many price awards. In 2008 she was honoured with the “Goldene Stimmgabel” by Arte for her performance as SALOME, as well as she was nominated for the South Bank Show ITV Award at the Royal Opera House in London in 2009.

In the next years, the following parts and new productions are scheduled: JUDITH in “Bluebeard’s Castle”/Bartok at the Metropolitan Opera New York under Valery Gergiev, the singer will stage as well as sing “Salome”/Strauß at the New Opera House in Tokyo. Michael will open the 2014/2015 season at the Bayerische Staatsoper as EMILIA MARTY in “The Makropulos Affar”/Janácek. MARIE/MARIETTA in “Die tote Stadt”/Korngold will be performed by the singer in a new production which she will bring to the Teatro Wielki Warszawa and to La Monnaie in Brussels. KUNDRY in “Parsifal”/Wagner under Katharina Wagner is on the agenda at the Teatro Colon in Buenos Aires. In autumn 2015, Nadja Michaels will debut as ISOLDE in “Tristan and Isolde” in Amsterdam. Many more productions are planned, but not scheduled as for now.

The singer-performer is known for her artistic projects, as well as she produces music herself. Furthermore, Nadja Michael is the head of mission of several social projects which supply support for children in need. Moreover, she started her own charitable foundation STIMME FÜR DIE MENSCHLICHKEIT which initiated the annual awarded ARTS AND AIR AWARD in Munich.